LiPo batteries (lithium polymer batteries) and embedded processors are a boon to the Internet of Things (IoT) market. They have enabled IoT device manufacturers to pack more features and functionalities into mobile edge devices, while still providing a long runtime on a single charge. The advancement in sensor technology, especially vision-based sensors, and software algorithms that process large amount of data generated by these sensors has spiked the need for better computational performance without compromising on battery life or real-time performance of these mobile edge devices.

The Intel® Movidius™ Visual Processing Unit (Intel® Movidius™ VPU) provides real-time visual computing capabilities to battery-powered consumer and industrial edge devices such as Google Clips, DJI® Spark drone, Motorola® 360 camera, HuaRay® industrial smart cameras, and many more. In this article, we won’t replicate any of these products, but we will build a simple handheld device that uses deep neural networks (DNN) to recognize objects in real-time.

A battery-powered DIY handheld device, with a camera and a touch screen, that can recognize an object when pointed toward it.

If you would like to see the final output before diving into the detailed steps, download the code from our sample code repository and run it.

The above commands must be run on a system that runs the full SDK, not just the API framework. Also make sure a UVC camera is connected to the system (built-in webcam on a laptop will work).

You should see a live video stream with a square overlay. Place an object in front of the camera and align it to be inside the square. Here’s a screenshot of the program running on my system.

Here is a picture of how my hardware setup turned out: 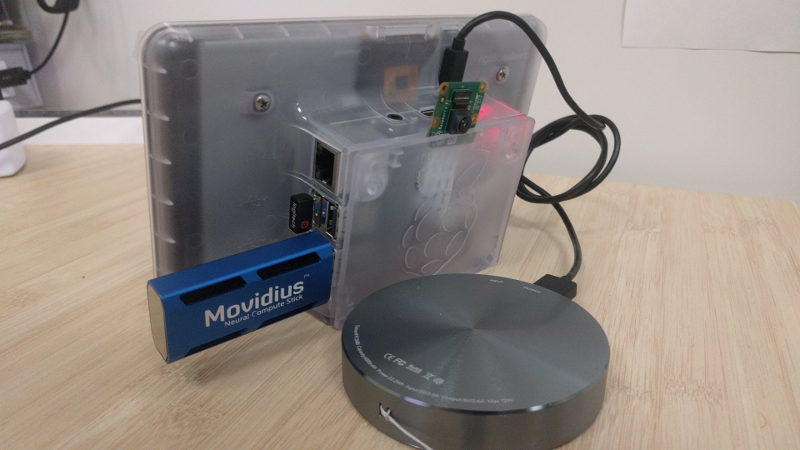 Skip step 2 if you are using a USB camera.

Enable v4l2 driver: For reasons I do not know, Raspbian does not load V4L2 drivers for CSI camera modules by default. The example script for this project uses OpenCV-Python, which in turn uses V4L2 to access cameras (via /dev/video0), so we will have to load the V4L2 driver.

I am a big advocate of code reuse, so most of the Python script for this project has been pulled from my previous blog, ‘Build an image classifier in 5 steps’. The main difference is that I have moved each ‘step’ (sections of the script) into its own function.

The application is written in such a way that you can run any classifier neural network without having to make much change to the script. The following are a few user-configurable parameters:

Before using the NCSDK API framework, we have to import mvncapi module from mvnc library:

If you have already gone through the image classifier blog, skip steps 1, 2, and 5.

Just like any other USB device, when you plug the NCS into your application processor’s (Ubuntu laptop/desktop) USB port, it enumerates itself as a USB device. We will call an API to look for the enumerated NCS device, and another to open the enumerated device.

Step 2: Load a graph file onto the NCS

To keep this project simple, we will use a pre-compiled graph of a pre-trained GoogLeNet model, which was downloaded and compiled when you ran make inside the ncappzoo folder. We will learn how to compile a pre-trained network in another blog, but for now let’s figure out how to load the graph into the NCS.

Step 3: Pre-process frames from the camera

As explained in the image classifier blog, a classifier neural network assumes there is only one object in the entire image. This is hard to control with a LIVE camera feed, unless you clear out your desk and stage a plain background. In order to deal with this problem, we will cheat a little bit. We will use OpenCV API to draw a virtual box on the screen and ask the user to manually align the object within this box; we will then crop the box and send the image to NCS for classification.

Step 4: Offload an image/frame onto the NCS to perform inference

Thanks to the high-performance and low-power consumption of the Intel Movidius VPU, which is in the NCS, the only thing that Raspberry Pi has to do is pre-process the camera frames (step 3) and shoot it over to the NCS. The inference results are made available as an array of probability values for each class. We can use argmax() to determine the index of the top prediction and pull the label corresponding to that index.

If you are interested to see the actual output from NCS, head over to ncappzoo/apps/image-classifier.py and make this modification:

Step 5: Unload the graph and close the device

In order to avoid memory leaks and/or segmentation faults, we should close any open files or resources and deallocate any used memory.

The following pictures are of my project in action.