Why do I need a custom model?

The Neural Compute Application Zoo (NCAppZoo) downloads and compiles a number of pre-trained deep neural networks such as GoogLeNet, AlexNet, SqueezeNet, MobileNets, and many more. Most of these networks are trained on ImageNet dataset, which has over a thousand classes (also called categories) of images. These example networks and applications make it easy for developers to evaluate the platform, and also build simple projects. If you plan on building a proof of concept (PoC) for an edge product, such as smart digital cameras, gesture controlled drones, or industrial smart cameras, you will probably need to customize your neural network.

Let us suppose you are building a smart front door security camera. You won’t need a ‘zebra’, ‘armadillo’, ‘lionfish’, or many of the other thousand classes defined in ImageNet; instead you probably need just 15 to 20 classes such as ‘person’, ‘dog’, ‘mailman’, ‘person wearing hoody’, etc. By reducing your dataset from a thousand classes down to 20, you are also reducing the number of features that need to be extracted. This has a direct impact on your neural network’s complexity, which in turn impacts its size, training time, and inference time. In other words, by optimizing your neural network, you can achieve the following:

A customized GoogLeNet deep neural network that can classify a dog vs. a cat.

For the sake of simplicity, I have organized this article into four sections:

First, download the source code and helper scripts from NCAppZoo.

Unless you are building a deep neural network from scratch, selecting the base neural network plays a critical role in the performance of your smart device. For example, if you are building a salmon species classifier, you can select a network topology that is simple enough to classify just a couple of classes (fewer features to extract), but it has to be fast enough to classify the fish swimming in rapid succession. On the other hand, if you are trying to build an inventory scanning robot for warehouse logistics, you may want to choose a network that sacrifices blazing speed classification in favor of being able to classify a large varity of inventory.

Once you have a good base network, you can always fine-tune it to strike a good balance between accuracy, execution time, and power consumption. GoogLeNet was designed for the ImageNet 2014 challenge, which had one thousand classes. It is clearly an overkill for an application that differentiates between dogs and cats, but we will use it to keep the tutorial simple, and also to clearly highlight the impact of customizing neural networks on accuracy and execution time.

Make a note of the mean values displayed on the console, we will need it during inference.

If everything went well, you should see the following directory structure:

Given our small dataset (25,000 images), training from scratch wouldn’t take too long on a powerful hardware, but let’s do our part in conserving global energy by adopting transfer learning. Since GoogLeNet was trained on ImageNet dataset (which has images of cats and dogs), we can leverage the weights from a pre-trained GoogLeNet model.

Caffe makes it super easy for us to apply transfer learning by simply adding a --weights option to the training command. We would also have to change the training & solver prototxt (model definition) files depending on the type of transfer learning we adopt. In this example, we will choose the easiest, fixed feature extractor.

The dogsvscats project on github provides pre-modified prototxt files. To better understand the changes I have made, run a comparison (diff) between Caffe’s example network files and the ones in this project.

To initiate the training process, run the commands listed below. Depending on how powerful your training hardware is, you can either take a beer break or a nice long nap.

If everything went well, you should see a bunch of .caffemodel and .solverstate files in the dogsvscats/bvlc_googlenet/org directory.

During my test run, the model did not converge well, so I ended up training from scratch and got better results. If you see the same problem, just rerun the training session without the --weights option. If you have any pointers on why my model didn’t converge, please let me know through the Intel Movidius developer forum.

bvlc_googlenet_iter_xxxx.caffemodel is the weights file for the model we just trained. Let’s see if, and how well, it runs on the Neural Compute Stick. NCSDK ships with a neural network profiler tool called mvNCProfile, which is a very usefull tool when it comes to analyzing neural networks. The tool gives a layer-by-layer explanation of how well the neural network runs on the hardware.

Run the following commands on a system where NCSDK is installed, and ensure NCS is connected to the system:

You should see a console output of the bandwith, complexity, and execution time for each layer. You can access a GUI version of the same information on output.gv.svg and output_report.html.

Notice how the Inception 4a, 4b, 4c, and 4d layers are the most complex layers, and they take quite a long time to do a forward pass. Theoretically, deleting these layers should give a 20-30 ms increase in performance, but what would happen to the accuracy? Let’s retrain with custom/deploy.prototxt.

Below is a pictorial representation of the changes I made to bvlc_googlenet/org/train_val.prototxt. I used CAFFE_PATH/python/draw_net.py to plot my networks. Netscope is another good online tool to plot Caffe-based networks. 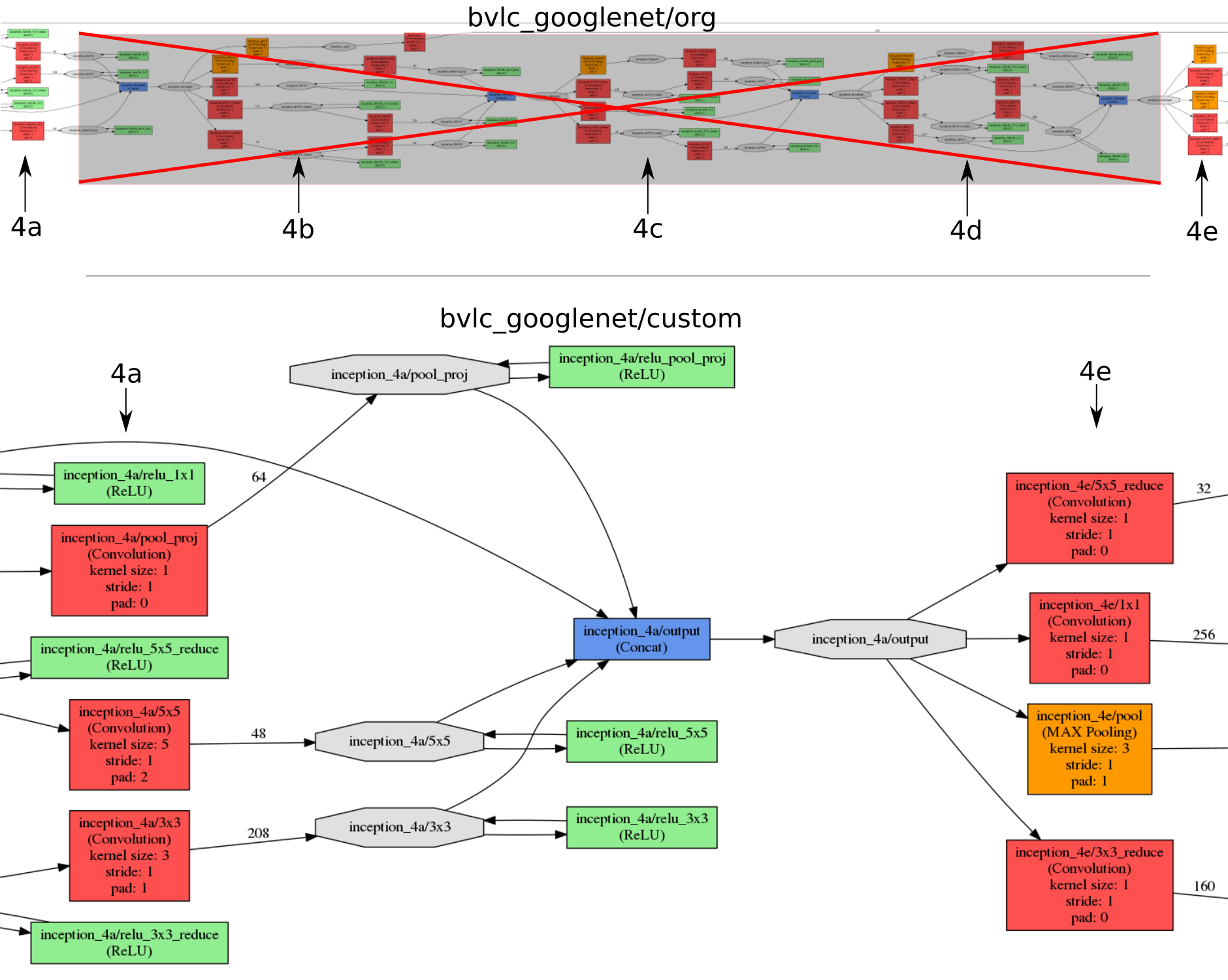 This training session will definitely be longer than a single coffee or beer break, so be patient. Once training is done, we can rerun mvNCProfile to analyze our custom neural network.

Looks like our custom model is 21.26 ms faster and is 3 MB smaller when compared to the original GoogLeNet. But how does this affect the network’s accuracy? Let’s plot the learning curve for the training sessions before and after customization.

Plot the custom network’s learning curve in another terminal.

The graph’s labels might be a little misleading, because you would expect the “Test Loss” to go down over iterations; however, it’s going up. The graph is actually plotting loss3/top-1, which is your network’s accaracy. See the loss3/top-1 layer definition in train_val.prototxt for more details.

Now that we are satisfied with the performance of our neural network, we can deploy it on an edge device like a Raspberry Pi or a MinnowBoard. Let’s use image-classifier to load the graph and perform inference on a specific image. We would have to make some changes to the original code so that we are applying the right mean and scaling factor, and are pointing the code to the right graph and test image.

Run image-classifier after you have made the above changes: 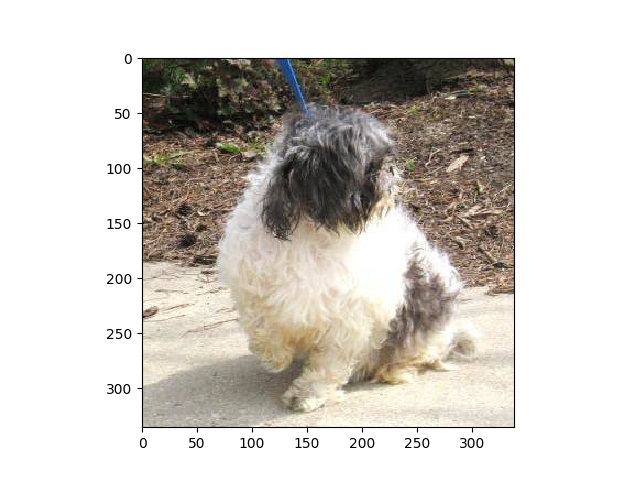 Another useful tool to test your image classifier is rapid-image-classifier, which reads all the images in a folder (and sub-folder) and prints out the inference results. Do the same changes we did for image-classifier above, and run the app.

Notice the ~20 ms difference between the first and second inference? This is because the first call to loadTensor after opening the device and loading the graph takes more time than consecutive calls.